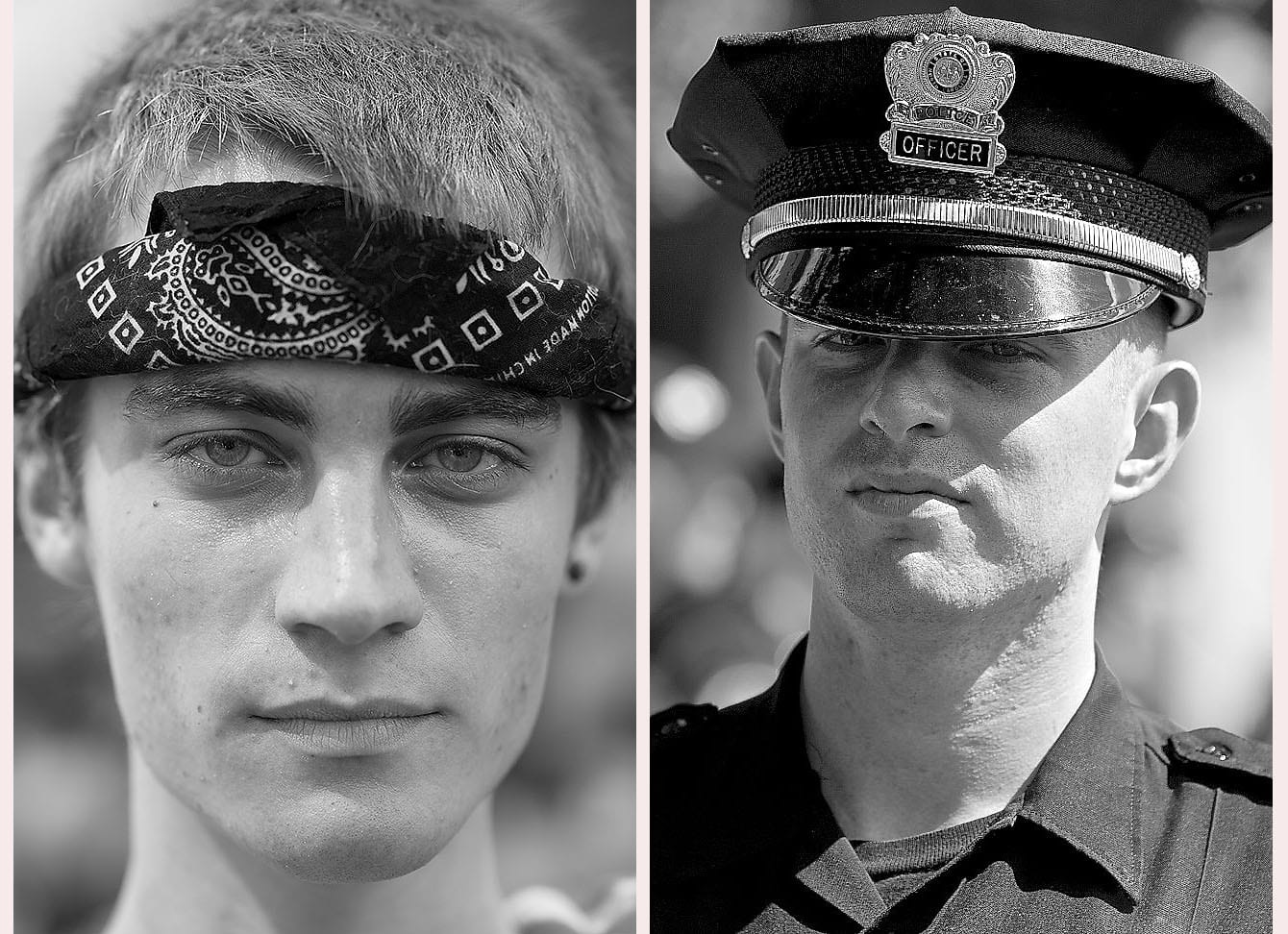 Interview by Larry Frolick for Raw View #8, a magazine on contemporary documentary photography.

You oppose two archetypes in this photo of the Democratic Convention. Rebel vs. Hero. The seem weary—are we getting tired of the old masculine roles?

SS. In the United States people are choosing sides, putting on the label and staying in the pen they’ve chosen. I noticed how similar the police and protesters’ faces seemed: a weariness on both sides. Many faces could be either, but for the hats.

The crack between private expectation and public delivery has grown darker since 2001. What’s Steve Simon saying? We’re all implicated?

SS. The facades we put up are thinner now. The stresses we experience feel closer to the surface then they used to. I think these are dangerous times. I have a young son now, he helps me to stay positive, though I am a worrier.

You made the protesters’ heads bigger than the cops’. Why?

SS. Even after a photographic lifetime of covering news, I was a little timid pointing my lens at police. Sure they had guns but I felt sympathy for them. I didn’t have a long lens just 85mm. I found it easier to get physically close and fill the frame with protesters.

The cop seems to trust you. What’s your secret?

SS. Though it doesn’t help me buy a drink in a crowded bar, I do seem to wear a cloaking device when shooting on the streets.  Even with a big camera, people tend to pay me no mind. I think it’s attitude, silent communication.  I make no judgements.

People must see Steve Simon coming to the protest with his Nikon and suck in their cheeks.  Aren’t you the real reason they’re there?

SS. That is true. But when I’m doing these personal project shoots, I have no editor, no pressure just the luxury of trying to capture authentic moments. Not to say I won’t capture a good poser. But moments are more revealing. The protesters are aware of media but their emotional slogan-shouting is real.

Does technology create niches we fill like reef fish? Is everyone “cloaked” today?

SS. We’re more exposed. Everyone is the media. I love the current technology and would never go back–but my process hasn’t changed. Content is still king. A small truth can leap into world-consciousness. Underneath we are beating hearts wanting to connect.

Cop and protester–my eyes keep moving restlessly between two polarities. Is this how fractured urban reality works? Is the viewer the anxious sum of your camera’s unresolved contradictions?

SS. I’m drawn to polarity. Urban reality is a mess of chaos that somehow perseveres. Contradictions all around: weak and powerful, hideous and beautiful, light and shadow.

Your handmade album of 9/11 photos was found in Susan Sontag’s garbage, where her staff had tossed it–instead of giving you a review. The dumpster-picker sold it to a guy who produced your 9/11 book. How important is faith in professional work to life on a chaotic planet?

SS. Faith is all-important for a photographer pursuing creativity. A difficult profession to make a living at, so survival is success. Any artist who doesn’t let the uncertainty and difficulty stop them will succeed. Strong content will find the light.

An old cowboy Avedon photographed one day in the desert for the American West saw his photo by chance years later, and realized his life had value. What’s the impact of your portraits on your subjects?

SS. Avedon said In The American West was his most important work. Controversy surrounded the project. People thought the images were exploitive. I think Avedon made extraordinary, compelling images that are often not flattering, but the criticism didn’t come from the people in the pictures.

You’re doing a lot of teaching these days. What lesson might your students take from this work?

SS. Have a point of view. Make it personal. The more you’re willing to share of yourself, the more interesting and powerful your images will be.

See more of my work on political conventions here.