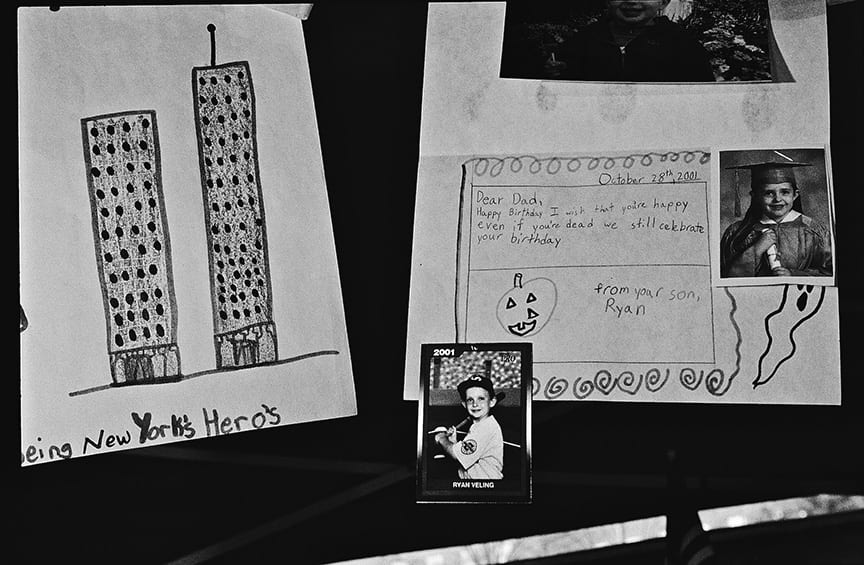 Faith is an element of my work that continues to surface, from project to project. Not only in the stories I choose to pursue, but also in my philosophy and approach to shooting.

On  the 19th anniversary of the 9/11 attacks, I thought I would re-tell the story on what happened to me with my project Empty Sky—The Pilgrimage To Ground Zero.  It was an exercise in street photography, faith and belief in my own work.

This story dates back to just after 9/11. I had recently moved to New York City but was in Miami on September 11, 2001; scheduled to come back on Sept 11th. Of course that didn’t happen. We got back on September 18th and like so many New Yorkers back then, I was in somewhat of a daze looking for something I could do to help. As a photographer, I focused on the wave of patriotism that was everywhere around me but I avoided the Ground Zero site itself. I had let my press card lapse and authorities were telling people to stay away.

But towards the end of September I changed my mind. I found myself near Ground Zero unexpectedly and noticed the strong reactions of people all around me. They were powerful and told a story about the event that was different from the photographs I had documenting the recovery and clean-up effort. I wanted to do the project, partly to express my own grief and bewilderment after 9/11, but also because of the story told by the faces of those who came to see what had happened. 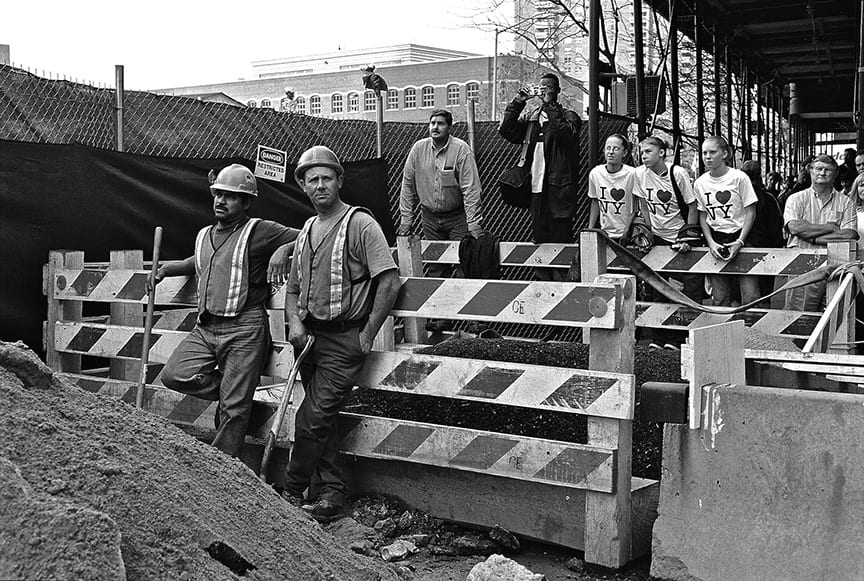 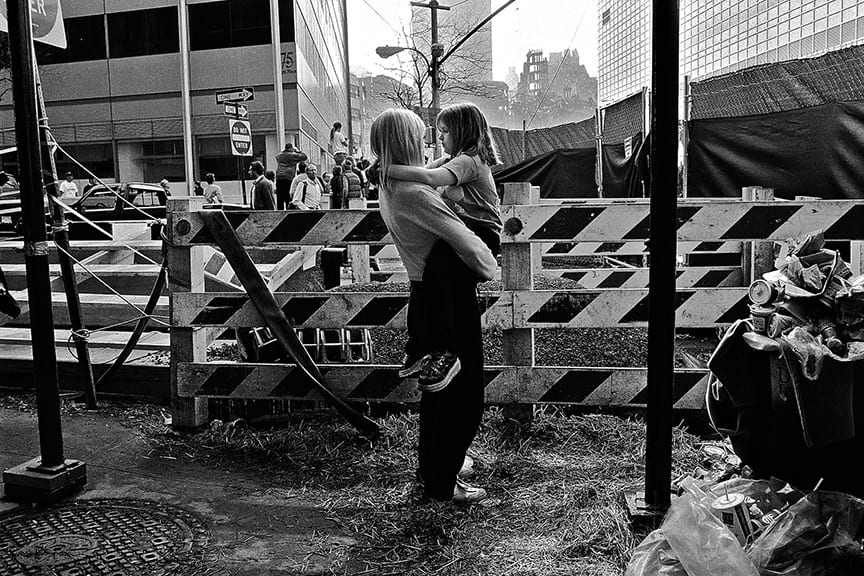 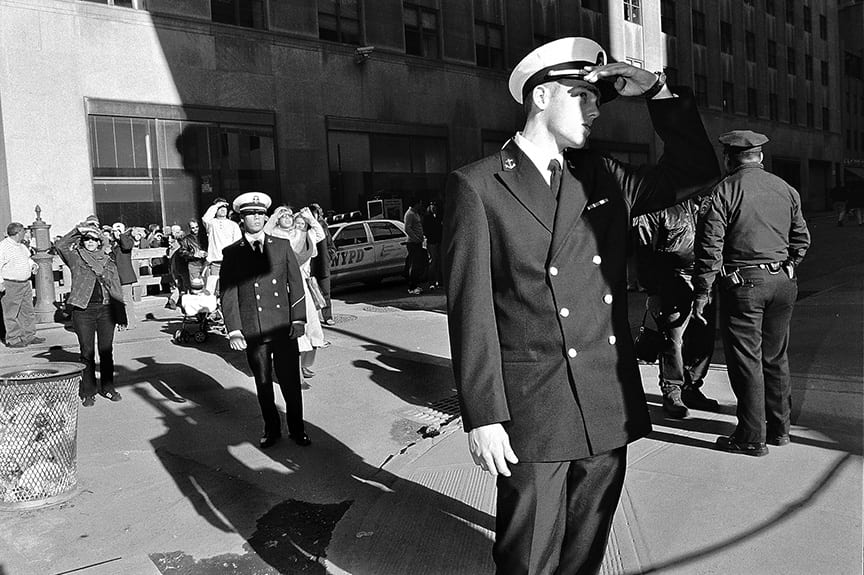 After shooting more than 100 rolls of 35mm Tri-X film during a three-month period from late September to Christmas 2001, I felt I had a series of photographs that would work well as a book. The book has always been a great way to encapsulate a project and since the on-demand publishers were still years away, I created multiple copies of a book dummy in black and white and had done my research looking for publishers of photography books, whom I then submitted the work to. 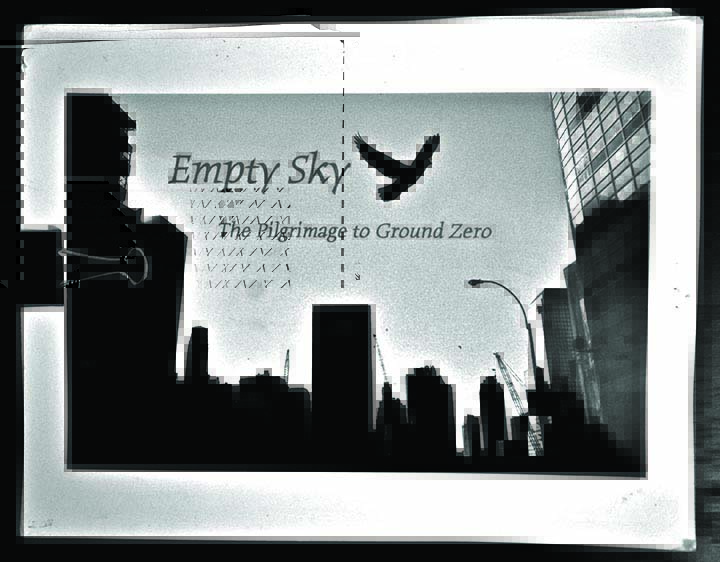 Though the project was well received judging by the positive comments in some of the rejection letters, they were rejection letters nonetheless–many rejection letters. Photography is a great way for us to communicate what we think is important in life, or beautiful, or scary or is a problem that needs attention; in other words, it can be a very personal way to communicate. So when you are rejected, it can hit you pretty hard. But it’s important not to take it personally; learn from it and keep moving forward. 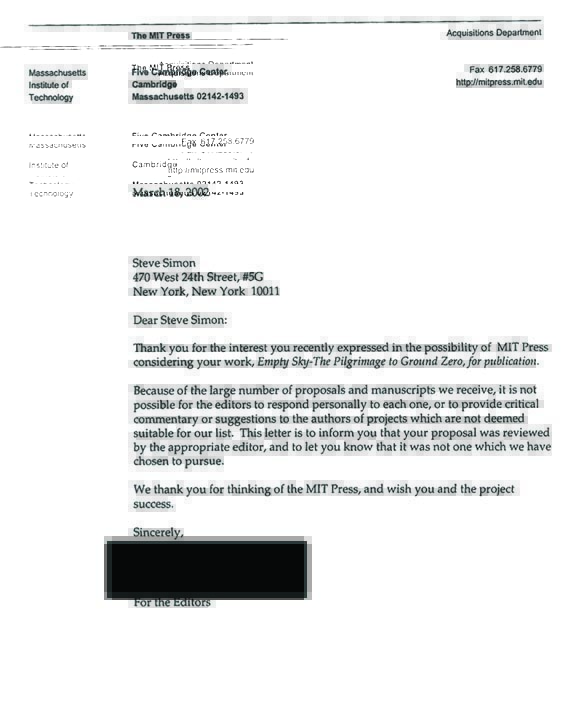 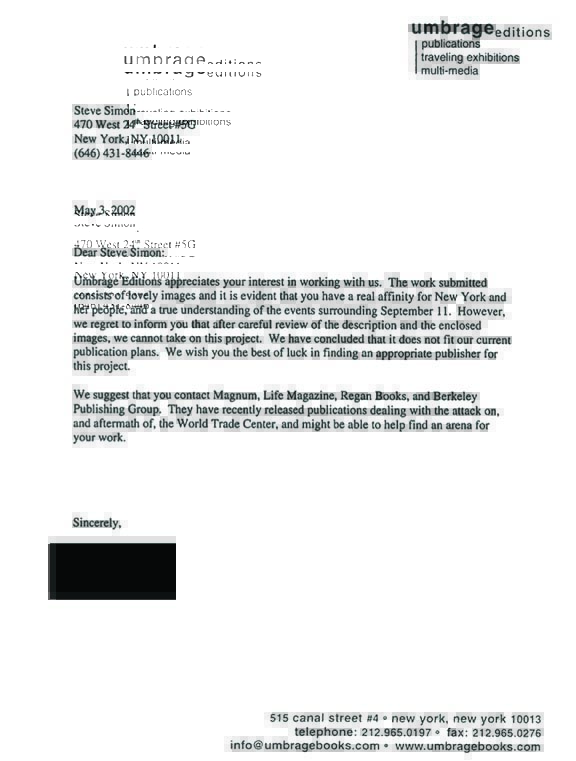 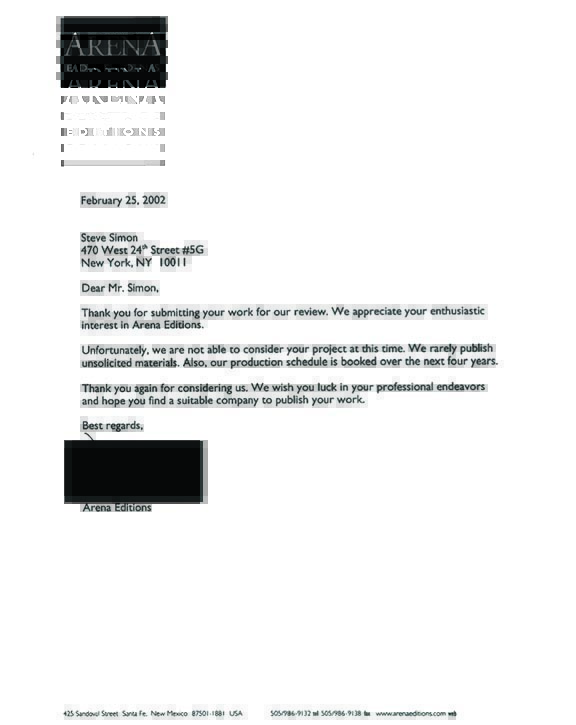 It’s easier than ever to create your own professional looking book today, but back then it was not. It was even harder and still is to get a publisher to take on your photography book project, since they are often expensive to produce and have a limited market.

But if you have dreams of getting a book published commercially, expect rejection, and keep the faith. Persevere.

I believed in this work and did not give up on my dream of getting it published in book form despite the rejections.  I learned from the constructive criticism the letters would often contain, and finessed the book dummy to improve it before I sent it off to the next publisher on my list.

After the flurry of rejection letters for my proposed book (which I titled: Empty Sky: The Pilgrimage To Ground Zero), I tried a different way of approaching my publishing problem. The late Susan Sontag lived in my building on 24th Street. She was connected to photography through her seminal volume: On Photography. She was also an opinionated and well-known New Yorker. I thought that if she would agree to write a forward for this project then maybe book publishers would take more notice of the work.

So I got the doorman Ralph Garcia to get my book dummy to her, which he did. The very next day I got a call from her assistant telling me how busy she was and it might take a few months for her to even look at the book maquette. I mentioned to him that I had extra copies and no expectations; I really just wanted her to see the work– and he promised (somewhat reluctantly) that Ms. Sontag would see the book dummy. That was it. I felt confident she would see it. 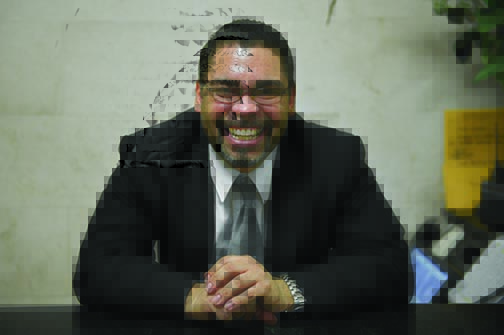 Months passed, I continued to seek a publishing deal, but kept getting rejection letters. I never heard back from Susan Sontag or her assistant. But one day I did get a call from a New York Photographer named Andy Levin, now based in New Orleans, who told me he was looking at my work from Ground Zero and liked it very much. He said that he had purchased a book dummy of my work from a guy who sold it to him on Seventh Avenue in New York City, for four dollars. He went on to tell me that the guy who sold him the book dummy, said he had plucked it from Susan Sontag’s garbage.

As I was trying to process what he was saying without speaking, he mentioned a friend he had at Life Magazine (Barbara Burrows) who was publishing a commemorative volume of images post 9/11 that would be published on the one-year anniversary and asked if he could show her the work. My mind was racing as I was processing his words but of course I said yes…

To make a long story slightly shorter, Life’s book, The American Spirit, with an introduction by George W. Bush—published with 8 pages of my work from Ground Zero. I got my biggest paycheck since moving to New York in 2000 ($8000) and with the credibility of the Life Book, I was able to find a small publisher in Montreal who published Empty Sky-The Pilgrimage to Ground Zero. 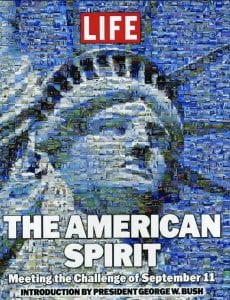 I don’t know if Susan Sontag ever actually saw the book dummy, but it really doesn’t matter to me. In my acknowledgements I thanked all the players in this story, including a fellow named Steve in my building, who often sets up a stand on Seventh Avenue to sell the stuff that people throw away. (He now uses craigslist). I had done all the right things in trying to find a publisher but it was a recycling bin in my building that lead to my biggest success in publishing to that time. 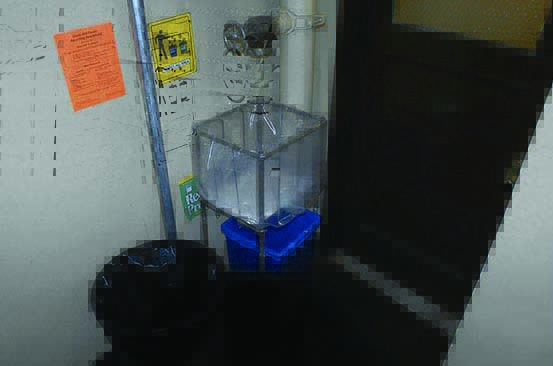 The moral of the story for me was that if you truly believe in what you are doing, things will work out in a positive way. You never know where your next success will come from, so don’t give up. Get the word out, and keep the faith.

Editor’s Note: You can see more of the work from Ground Zero on the portfolios page. The 9/11 Memorial Museum purchased a complete set of prints from Empty Sky for their permanent collection. The book is available at the Museum Store. 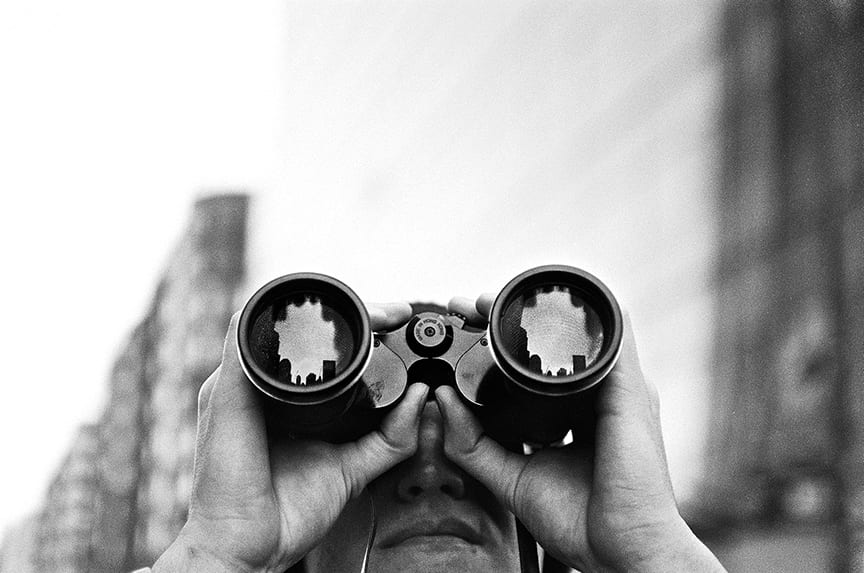 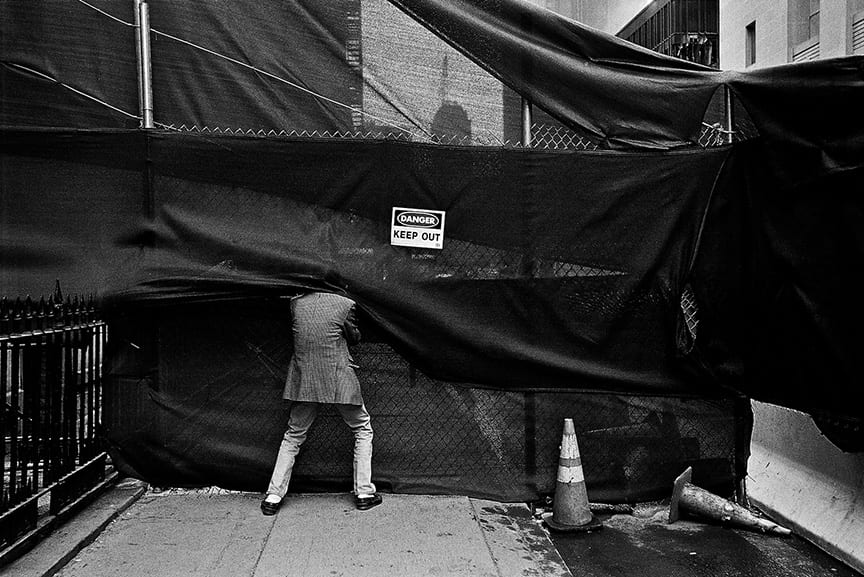 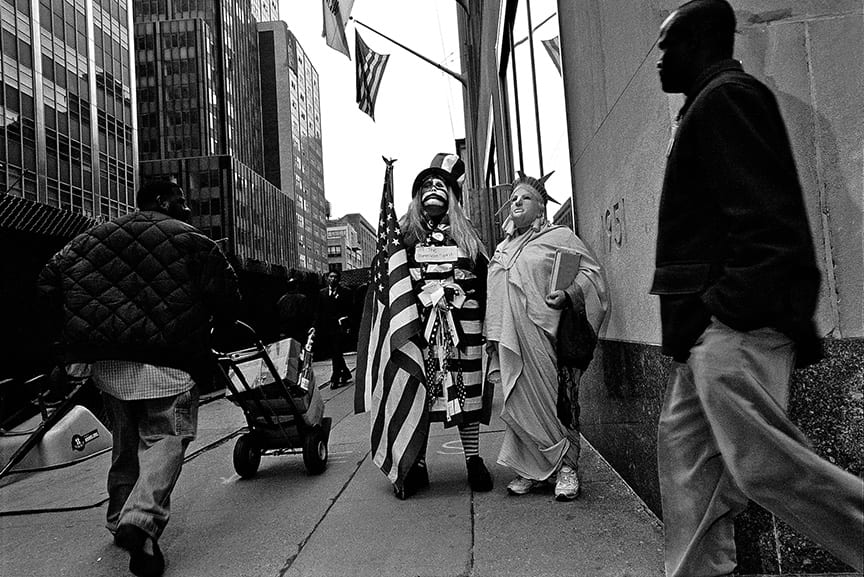 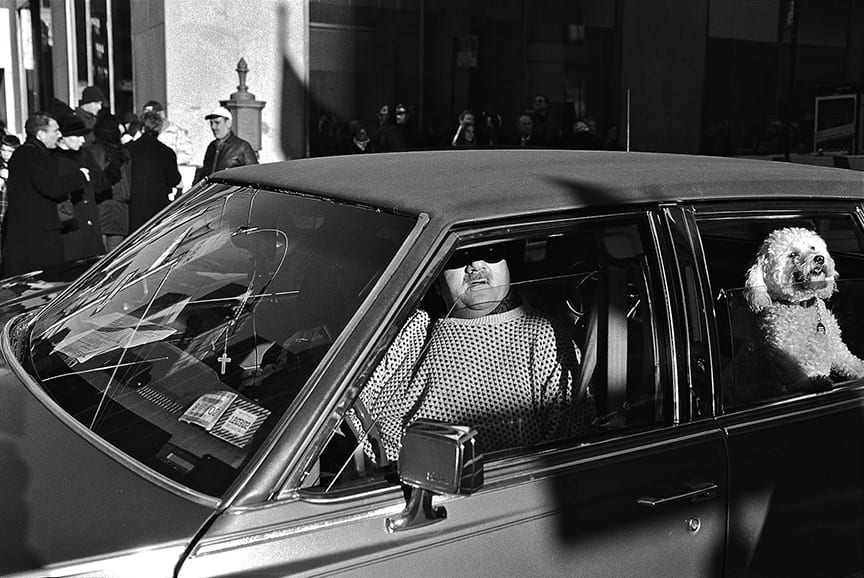 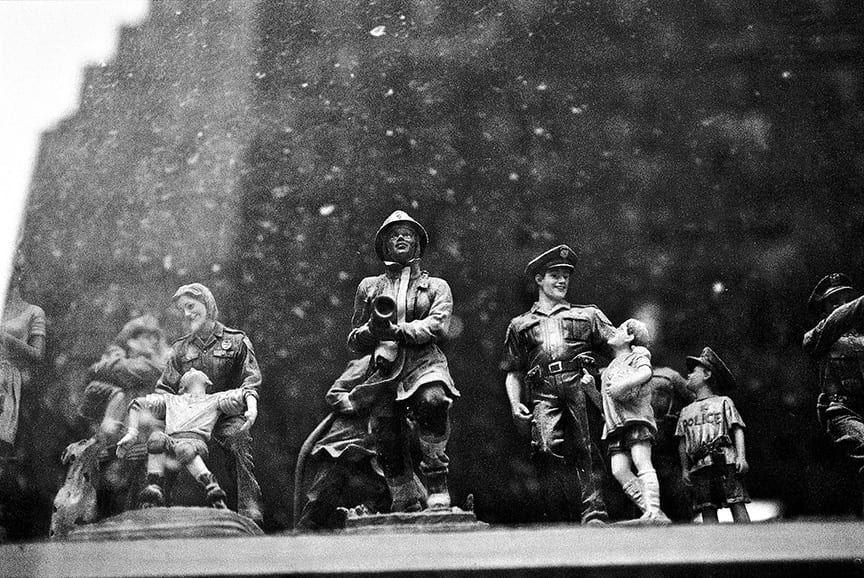 Written By
Steve Simon
More from Steve Simon
I hope everyone is hanging in. On the latest podcast, Cliff and...
Read More